The Mature MouseTM has been a fan of The Muppets since their original television show, which aired from 1976 to 1981. The show’s humor appealed to kids and adults, alike. I never missed an episode and was such a dedicated fan that I often thought of them as real “people.” There was one evening I caught myself trying to read the “lips” of the characters because I had the sound turned off to take a phone call.

Jim Henson, Frank Oz, and the other puppeteers breathed life into each of the unique creatures in the Muppet realm. Kermit the Frog and Fozzie Bear are some of my favorite Muppets. Whacka, Whacka! And, of course, there is the Swedish Chef. Being Swedish, I knew this character was a satirical stereotype, but was not the least bit offended. I saw the Swedish Chef as homage to all things Scandinavian.

Muppet*Vision 3D was created by Jim Henson and added to Disney’s Hollywood Studios in 1991. This was among the last projects Henson worked on before his death. The Disney Corporation officially welcomed The Muppets in 2004. There were plans to add attractions, restaurants, and shops themed around these creatures. However, nothing ever came of those plans. 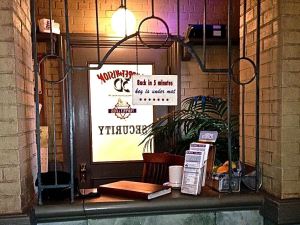 Muppet*Vision 3D features the same characters as the original television show and the feature movies, as well as the same chaos and disaster. The Mature MouseTM makes it a point to enjoy this attraction during my visits to Disney’s Hollywood Studios. I strongly recommend taking a moment to explore the cue. The Imagineers put a lot of time and effort into the theming of this area. Always look under the mat for the key.

Whether or not Muppet*Vision 3D, or even the Muppet characters, will have a place at Disney’s Hollywood Studios after the extensive refurbishment is unknown at the time of the writing of this post. I am sure the popularity, or lack thereof, of The Muppets, a new show on ABC, which is owned by Disney, will have an impact on the future of the Muppets at Walt Disney World.

Please use the link to visit The Mature Mouse™ store for logo merchandise. Many of the items would make great additions to your vacation gear and attire.

And, make sure you consult Jennie Nowers about your next Disney vacation. Tell her that The Mature Mouse™ sent you and receive a special gift from Jennie with your next booking.